Thank you all for coming to our semi annual Seed Exchange.  We had ample tomatoes to taste, with some varieties repeated from different growers – interesting to see how location makes a difference.  It’s all in your soil!  (And I need to work on improving mine. 😉  Here are a few of the tomato varieties we sampled: 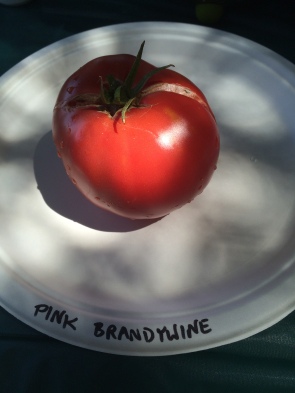 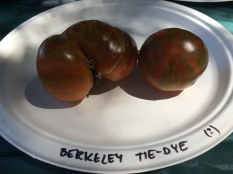 The Indigo Apple had actually an interesting flavour.  I would not choose it if I had a limited space, but it’s certainly interesting enough to grow as a display and curiosity item.  You can see hints of blueberry blue on its skin in the photo above. 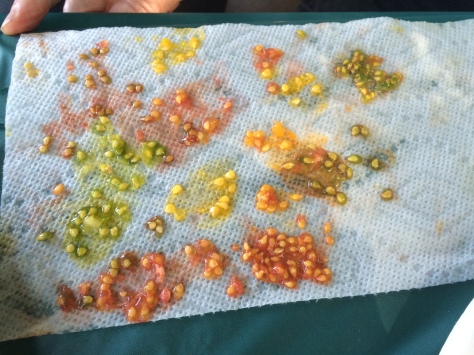 While most of us carefully save seeds in separate containers, label them and let them ferment a little, others like to be surprised with what they grow.  It makes for an interesting art piece.  😉

We swapped some seeds and I’ll be curious to try new variety of carrots.  If you like what you see, come and join us next time around – in February 2017!

It may be a little late for starting your Winter garden at the end of August but the climate here is so forgiving, we should be still all right.  We are going to have our semi annual Seed Exchange on the 27th of August, from 2 till 4pm at the usual Cannery Park in Sunnyvale.  Please come along and share your seeds or starts, or edible weeds, as may be!  I’m eating a lot of Purslane this year, as it is popping everywhere in my backyard.  Let’s see what other people grew this Summer and what they are planting for winter; let’s learn from each other.

This year has proven to be pretty good for tomatoes so far and hopefully it will hold true till the end of August.  We should have a nice heirloom tomato sampling at the exchange, so please bring a few of your favourite varieties for tasting or anything that did well in your garden.  Sharing is the theme!  I will have the usual lemonade and simple munchies.

Savoring the taste of Summer!

Varieties voted the tastiest by our guests: 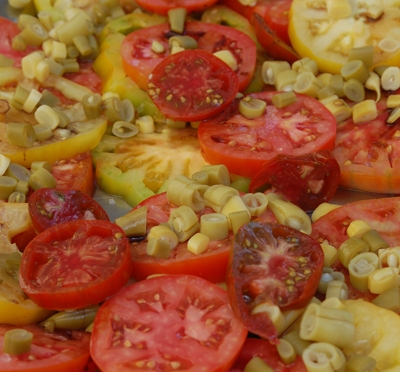 Savoring the last taste of Summer!

Varieties voted the tastiest by our guests:

Other runner up varieties:

* We would like to note, that all the Isis Candy disappeared early on, so we are not sure about the honesty of our voters… 😉

The two varieties displayed were:

Vendors: Heirloom Ketchup and Yummy Tummy Farms for enterntaining our guests at the event;

Our Volunteers: Sawako Yoshimura, Susana Craig, Ken and Carol, David Braunstein, Colette Torr, Elena Ponce, Camille Campbell, Ron Miller and Lian Lu for their tremendous help before, during and after the festival;

Logistics: and lastly to Rob Orlovic for helping with the overall organization of the event.

The time was early afternoon on a hot, Indian Summer day.   The oaks provided much needed shade and the chefs – gourmet dishes.

Recipes, by the Chefs:

One seed to many

Patricia MacCracken, for providing the bulk of the tomatoes (from One Seed to Many) and enormous help at the event;

Amy Sutor, Stephanie Adams, Gary Stockdale, Debra Eskinazi, Sawako Yoshimura, Jan Ducha for their help before, during and after the festival;

Farms: One Seed to Many, Full Circle Farms and Wild Boar Farms for providing their delicious tomatoes;

and lastly to Rob Orlovic for helping with the overall organization and logistics of the event.

We had over 40 varieties of Heirloom Tomatoes, different heirloom ketchups (and their maker on site), gourmet vinegars and oils from Hare Hollow, home made heirloom tomato sauce, and some exotic and delicious flavoured ice creams that were an instant hit with the crowd in that last, hot weekend of 2009 (e.g. tomato/watermelon/mint flavor). To acompany tasting efforts, our guest Ethan was playing mellow, acoustic guitar music. Master Gardener, Marianne, won everybody’s praise for her delicious tomatoes and abundant gardening tips. Everyone seemed to have a really good, relaxed time sampling tomatoes and sipping wine under the ancient oak trees. It was so nice, I’ll be looking forward to organizing the event again next year! 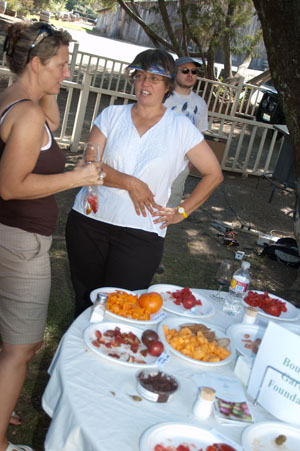 Heirloom tomatoes for tasting were provided by the following farms:

Heirloom tomatoes are “everything supermarket tomatoes wish they could be—juicy, intense, and full of flavor” according to Eric Rupert from Fine Cooking.  The variety in their color indicates the variety in their taste, from citrus undertones to hints of smoky flavors.  Heirlooms are also open pollinated, meaning seeds of the parent plants will produce new generations of the same plants.  Read more on why we are tasting Tomatoes. 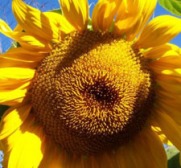